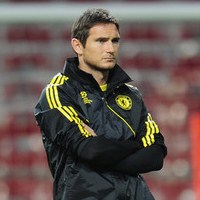 Roberto di Matteo has revealed that Frank Lampard has a big role in his future plans.

Reports have emerged that the England international will not be offered anything longer than a one-year contract extension and that Los Angeles Galaxy are ready to make him Major League Soccer’s latest big-name signing.

The 34 year old looks certain to return for Tuesday night’s Champions League game at FC Nordsjaelland and Di Matteo said: “His future is very strong at this club. He’s a very important player for us.

“I’ve had conversations with him, yeah, which I do on a regular basis with the players. I like to exchange opinions.

“He’s very supportive of the team when he’s not in the team. When he’s in the team, he’s a great performer as well.

“From that point of view, we’re fortunate to have a very strong squad with international players, so that’s going forward with a busy schedule, it’s important we use these players.”