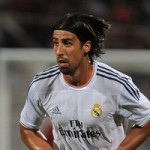 It has been reported that Chelsea are on red alert to the potential availability of Real Madrid midfielder Sami Khedira.

It is believed that Jose Mourinho is ken on bringing the German international to Stamford Bridge this summer and El Confidencial says such a move could be on.

With the signing of Asier Illarramendi and the promotion of Casemiro, midfield places are at a premium at Real and while they’re not hawking him around Europe, they will not rule out selling Khedira in the final weeks of the summer market.

Should an offer of €25 million arrive, Real won’t hesitate to sell the 26 year old defensive midfielder.

Mourinho has made it no secret of his admiration of Khedira – and the feeing is mutual.

Indeed, Khedira courted controversy from senior teammate Iker Casillas when stating in March: “If it were up to me, Mourinho would remain.”

Diawara Will Not Hesitate To Tackle Cristiano Ronaldo, Again