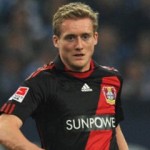 Chelsea’s summer strengthening is set to be sparked by the £20m arrival of André Schürrle from Bayer Leverkusen, with the club hopeful of announcing the signing of the Germany forward at the end of the season.

Talks are expected to resume with Leverkusen officials this week and the 22-year-old is apparently keen on the move, with a five-year deal agreed in principle. The transfer is likely to be a straight cash payment, though the idea of Chelsea’s Belgium winger Kevin de Bruyne moving to Bayer on loan has been mooted. The forward has impressed on loan at Werder Bremen and remains in Chelsea’s long-term plans but he would be open to remaining in the Bundesliga for a further year.

Schürrle, capped 22 times, can operate as a wide player or striker and has long been a transfer target for Chelsea, who had initially hoped to secure his services last summer before Leverkusen resisted their approaches. His should be the first of an anticipated flurry of arrivals concerning central midfield and a back-up goalkeeper. A more conventional striker is also on the club’s wish-list and interest is retained in Radamel Falcao of Atlético Madrid. Chelsea are pursuing targets despite not having a manager in place for next season and the hierarchy are well aware of the need to qualify for the Champions League to fulfil their ambitions.