Reports are out claiming that Chelsea have begun talks with Atletico Madrid over the signing of Diego Costa. 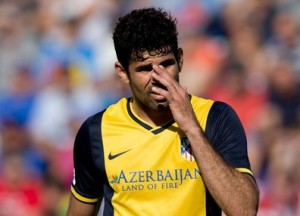 The Daily Mail reported that Chelsea have opened talks with Atletico Madrid in an attempt to wrap up the signing of Diego Costa ahead of the World Cup.

Costa, who is fighting to be fit for the Champions League final against Real Madrid in Lisbon on May 24, has already set his heart set on moving to Chelsea.

The Spain striker has a buy-out clause in his contract which is set at around £32m and Chelsea want to take advantage of it before their rivals can make a move.