Reports are out claiming that Chelsea owner Roman Abramovich is monitoring Lionel Messi’s situation at Barcelona. 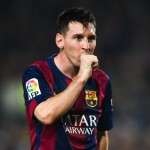 The Argentine international remains unhappy that he is earning less than Real Madrid rival Cristiano Ronaldo.

Messi signed a new contract in May that earns him around £16m a year after tax, but his great rival Ronaldo earns around £19m a year at Real.

The Daily Express claims that Barcelona have placed a near £200 million price tag on their most prized asset, but according to sources close to the player, sports giant adidas, who are Chelsea’s club sponsors, would be ready to help broker the deal in order to steal the striker from rivals Nike.

Messi’s close friend Cesc Fabregas, who joined Chelsea in the summer, has also been trying to persuade his pal that his future lies at Stamford Bridge.

Messi is apparently already studying English, and believes his son Thiago would receive a better education in London.