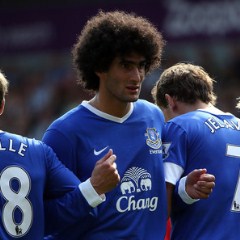 It has been reported that Chelsea are eyeing Everton star Marouane Fellaini.

The Mirror claim that the Stamford Bridge club are believed to be preparing a £25million January bid to beat rivals to the powerful Belgian’s signature.

Roberto Di Matteo is in desperate need for central midfield reinforcements after loaning Michael Essien to Real Madrid and selling Raul Meireles to Fenerbahce – while doubts continue to surround the effectiveness of the partnership between Frank Lampard and John Obi Mikel.