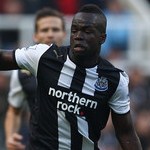 The Sunday Mirror says Andres Villas-Boas has made the combative Ivory Coast midfielder his top New Year target, but knows he will face tough competition from Manchester United.

And Toon boss Alan Pardew is warning potential suitors that they will have to break the bank to land a player who cost just £3.5m from Twente Enschede sixteen months ago.

Significantly, Pardew has not ruled out a Tiote departure in the next window, but is adamant that it will take a mega-money, Andy Carroll-style offer to prise the coveted 25-year-old from Newcastle’s grasp. The Toon top brass are very much aware of Chelsea’s interest in Tiote, who has been tracked by the ­Stamford Bridge regime since Carlo ­Ancelloti’s reign.

The Londoners tried to sign Tiote in ­January and again showed interest in July. But now the signs are that it could be third time lucky for Chelsea with ­Newcastle’s policy of self-suffiency indicating that every player has his price. I Wanted To Bring Lampard To Inter Milan – Jose Mourinho