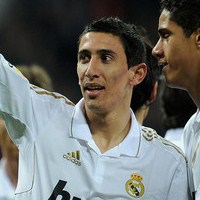 Reports have emerged that Chelsea are raising the stakes in their pursuit of Real Madrid winger Angel di Maria.

The Argentine international star has reportedly rejected Real’s new contract offer, which is worth more than double his current wages, and is now weighing up his options.

Record says the former Benfica star is a priority target for Chelsea owner Roman Abramovich and intermediaries have been told he’s prepared to go as high as £35 million for the Argie should he become available.