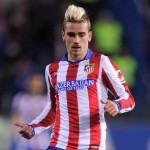 Reports are out claiming that Chelsea are weighing up meeting the buyout clause of Atletico Madrid winger Antoine Griezmann.

The Mirror reported that Chelsea are keeping tabs on Griezmann and could trigger a £43m buy-out clause in his contract this summer.

The French forward has fired 25 goals in his first season with Diego Simeone’s side and is tied to Vicente Calderon until 2020.

However, some of Europe’s leading clubs have been put on red alert after it was revealed Griezmann has a buy-out clause in his deal.