Reports are out claiming that Chelsea are reviving their summer interest in PSG defender Marquinhos. 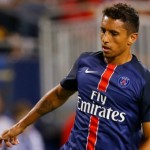 Le 10 Sport reported that Chelsea made a bid of £31m for the defender in the summer but Paris St-Germain rejected it.

And Blues boss Jose Mourinho remains keen on the 21-year-old and is ready to return for him in January, as Everton continue to stand their ground over the sale of John Stones.

Marquinhos is open to the move as he is growing more and more frustrated at his status as third choice centre-back behind the partnership of David Luiz and Thiago Silva.

Barcelona are also reportedly interested in the former Roma ace, but are not willing to pay more than £26m, a fee which won’t be enough for the French champions. John Obi Mikel Ready To Wait For His Chance At Chelsea