Reports are out claiming that Chelsea have made a massive contract offer to Bayern Munich midfielder Toni Kroos. 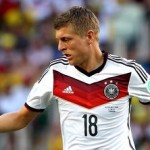 AS reported that Chelsea have offered the German international a colossal £6.4m a year deal at Stamford Bridge. It would see him earn a £125,000 a week.

With just a year to run on his Bayern deal, Chelsea could sign the highly coveted midfielder for as little as £15m.