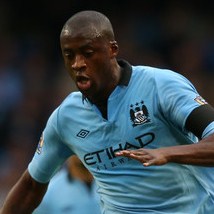 Sensational news are out claiming that Chelsea owner Roman Abramovich is ready to rattle Manchester City with a move for Yaya Toure.

The Daily Star claim that the Russian billionaire is ready to make unsettled Manchester City star Toure the best-paid player in the world in order to tempt him to Stamford Bridge.

The 29-year-old Ivoru Coast international midfielder recently expressed doubts about his future at City, claiming that he was looking for a new challenge.

The players’s agent Dimitri Seluk said : “The player gave everything he could for City and now needs a new motivation,”.

However it is said that the reigning European champions will have to dig deep to fend off competition from rivals Bayern Munich and PSG for the former Barcelona star, who has also been linked to a return to his old club.

Abramovich is ready to sanction a £300,000 per week wage packet for the star, to put him in line with football’s top-earner, Anzhi Makhachkala star Samuel Eto’o.