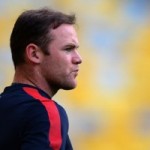 Sensational transfer news are out claiming that Chelsea are prepared to go higher for Manchester United striker Wayne Rooney.

The London Evening Standard reported that Chelsea will make another attempt to sign the England international star with a bid of around £40million.

The 27 year old remains the club’s main target before the transfer window closes on September 2 and they have already had a £27m offer rejected this month.

At the moment, Chelsea are going into the campaign with Fernando Torres, Romelu Lukaku and Demba Ba to choose from up front but Jose Mourinho wants Rooney to lead the line.

United on their part has stated that they are not interested in selling the former Everton striker to a Premier League rival.

However Rooney is still angling for a move away from Old Trafford this summer and is believed to have made Chelsea his first- choice destination.