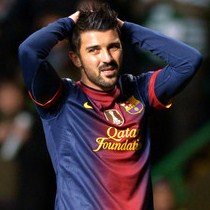 Interesting transfer news are out claiming that Chelsea are keeping tabs on David Villa’s situation at Barcelona.

The Daily Star revealed that according to reports in Spain, the 30-year-old Spanish international striker was involved in a furious row with Barca superstar Lionel Messi, following their side’s 2-1 Champions League defeat to Celtic.

It is the second time the pair have clashed this season, after a similar confrontation during the La Liga victory over Granada.

With the Catalan giants keen on a deal for Atletico Madrid ace Falcao or Santos phenomenon Neymar, Villa’s sale would be used to bankroll their transfer activity.

Chelsea, who have dropped their own bid for Falcao after refusing to pay more than £40m, are likely to see Villa as the perfect foil for Spanish international team-mate Fernando Torres.