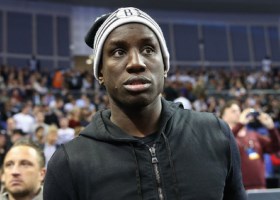 It has been reported that Chelsea boss Jose Mourinho is ready to sell Demba Ba in the summer.

According to the Daily Express, the Senegal international striker is likely to move on this summer after falling down the pecking order at Chelsea behind Samuel Eto’o and Fernando Torres.

Arsenal failed with an attempt in January for the Senegal striker.