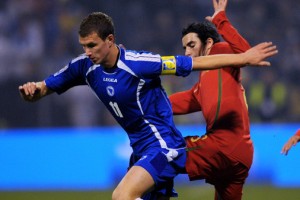 It has been reported that the Bosnia Herzegovina international striker, who has been watched by every top club in Europe, was thought to be heading to AC Milan.

The Italian club last night admitted that a deal could be scuppered by the late interest of the Stamford Bridge club.

It is believed that AC Milan cannot meet the £36m buyout clause in the 23-year-old’s contract and want to do a swap deal.

Chelsea, who face an 18-month FIFA transfer ban after this window, are now considering paying the price for the 6 ft 4 in forward who scored against Manchester United in the Champions League this season.

Dzeko, who hit the target 26 times as Wolfsburg won the Bundesliga last season, has also found the net 14 times in 23 internationals. Mourinho Tells Me To Be More Like Cristiano Ronaldo – Andre Schurrle