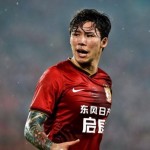 Reports are out claiming that Chelsea and Real Madrid are being linked with Guangzhou Evergrande defender Zhang Linpeng.

The China international is expected to leave Guangzhou for Europe in January and has the world’s biggest clubs chasing his signature.

Guangzhou Evergrande officials were in Spain over the weekend and took in Real Madrid’s victory against Granada on Saturday.

For his part, Zhang has stated that Chelsea have plans to sign him.

“Although I’m unable to play Premier League directly, I believe (Chelsea) will have the most professional arrangements regarding my permit,” Zhang said last month.

“I have no worries at all about the negotiations.”