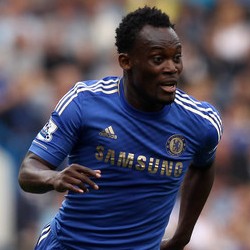 It has been revealed that Chelsea refused to do business with Arsenal yesterday over a loan deal for Michael Essien.

The 29 year old Ghana international signed for Real Madrid in the evening, but only after Arsenal and then Everton had tried to keep him in England.

According to Marca, Blues boss Roberto di Matteo refused to release Essien to a Premier League rival and welcomed Real’s approach when they came knocking late in the day.

Real coach Jose Mourinho is privately delighted to have got one over his great rival Arsene Wenger, the Arsenal manager.

It was Mourinho who brought Essien to England and Chelsea in 2005 from Lyon.

John Terry Out Of Euro2012 Qualifier Against Montenegro