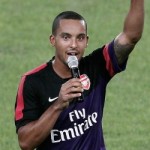 Reports have emerged that Theo Walcott’s future at Arsenal is set to be decided next week.

The Mirror claim that the England international winger will find out just how much Arsenal want to keep him when he returns from their Asian tour next week.

England winger Walcott, 23, has attracted interest from ­Liverpool and Chelsea as he enters the final year of his contract, but Walcott maintains he is not looking to leave.

The Gunners have yet to make him an offer, and Walcott ­is believed to be seeking a wage that takes into account his role.