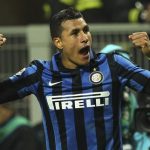 Reports have emerged claiming that Chelsea are in the hunt for Inter Milan defender Jeison Murillo.

Calciomercato.com says Chelsea are joining the battle for the stopper.

Roma, Arsenal, Leicester City and Stoke City have also been linked with the Colombian.

However, Chelsea are willing to spend big to prise him away from Inter.