Interesting transfer news are out claiming that Chelsea are ready to battle Manchester United for Ajax midfielder Viktor Fischer. 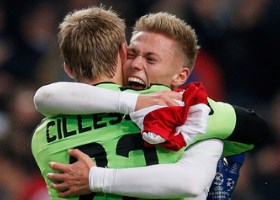 The Daily Star claims that according to reports, several big Premier League clubs are currently looking at snapping up the Ajax academy youth, who could following in the footsteps of his former team-mate Christian Eriksen, who left for Tottenham in the summer.

The reigning Premier League champions are known to be long-term admirers of the 19 year old winger, who is now understood to be valued at around £9m.