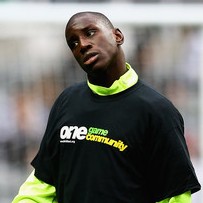 Chelsea have confirmed the signing of Newcastle United striker Demba Ba on a three-and-a-half year contract.

Ba, 27, has moved to Stamford Bridge after the London club triggered a release clause in his Newcastle contract to the value of around £7.5 million.
The Senegal international, who has only been outscored by Robin van Persie and Wayne Rooney since moving to the Premier League in January 2011, is eligible to play in Saturday’s FA Cup third-round tie against Southampton.

“It feels good to be here, I’m very happy and very proud,” Ba said.
“It was important for me, and for Newcastle, to get my future sorted and now we can move on. Now they have the whole month to buy someone and for me as well, the sooner the better. Now I am here I just need to get settled in.

“When the club who won the Champions League wants you, the decision is very easy. This club is massive and that’s something that helped the decision a lot. It was not a hard one.”