Reports are out claiming that Chelsea are pondering a move for Barcelona’s Cesc Fabregas. 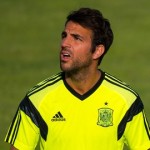 ESPN suggests that the Blues are seriously considering making an offer for the 27-year old Spanish midfielder who has also been linked with a number of other English clubs recently.

Sources told ESPN that Chelsea could lodge a bid for the former Arsenal captain as Barcelona prepare themselves for a summer cleanout under incoming manager Luis Enrique.

Fabregas has been linked with Manchester United, Manchester City and even a Gunners return in recent times but it appears as though he could now be headed for Stamford Bridge.