It has been reported that Imminent Chelsea signing Diego Costa is being sold by Atletico Madrid against his will. 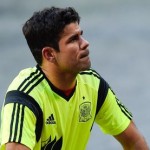 Marca claims that the Brazilian-born Spanish international previously allowed his representative, Jorge Mendes, to sign a deal which would see him move to Stamford Bridge this summer.

However the deal also included a penalty clause for Costa, understood to be several million euros, if the move failed to be completed.

The report also claims Costa began to have doubts over a move to Chelsea and was hopeful of agreeing a new contract at the La Liga champions.

However the penalty clause in the deal meant Costa would face paying a substantial fee to scrap his proposed switch to the Premier League and has resigned himself to leaving Atletico for Chelsea.

Liverpool Urged To Send Back Victor Moses To Chelsea