Reports are out claiming that Chelsea are prepared to sell Eden Hazard this summer. 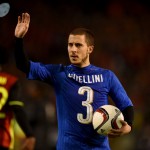 The Sun reported that Chelsea will demand £80m for Hazard should they sell him in the summer.

It is claimed Chelsea owner Roman Abramovich believes he could command a similar fee to the reported £85.3m which saw Gareth Bale leave Tottenham for Real Madrid.

Real have placed Hazard, who has struggled for form so far this season, top of their list of targets for a £250m summer spending spree – should their appeal against a !2-month transfer ban be successful.