It has been reported that Chelsea are circulating Romelu Lukaku’s name across Europe with an asking price of €40 million. 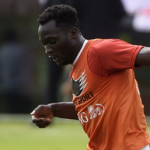 The Belgium international striker has been linked with a move to Juventus in Italy this week and admits he’s flattered by the speculation.

Atletico Madrid and Tottenham have also been linked with Lukaku, who says he doesn’t want to make decision until after the World Cup.