It has been reported that Chelsea midfielder Thorgan Hazard has been named Belgium Pro Player of the Year. 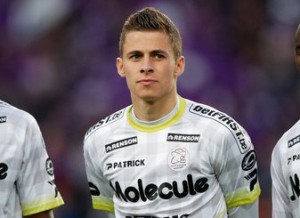 The 21-year-old capped off an impressive second season on loan with Pro League outfit Zulte Waregem by securing the gong today, saying afterward: “It is a special honour to be elected best player of the season.

“I am proud to stand here alongside Bacca and Perisic.” Samir Nasri Happy With Win Over Chelsea : We Wanted Revenge!