Reports are out claiming that Chelsea striker Diego Costa is angling for a return to Atletico Madrid. 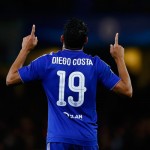 The Brazilian born Spanish international striker has made contact with Atletico directors and members of Diego Simeone’s coaching staff.

Approached directly about the prospect while in Alicante, Diego Costa smiled: “People are talking about it, but I have not received anything …”

However, there is discussion inside the Atleti boardroom about replacing the struggling Jackson Martinez with their former star.