According to reports by the Guardian, Atlético Madrid midfielder Raúl García says Fernando Torres would be welcomed back to the Primera Division champions with open arms if he opts to leave Chelsea. 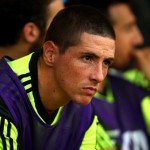 The 30 year old has been linked with a summer move back to Atlético, where the Spain international came up through the ranks to captain the first team before moving to Liverpool in 2007.

“I speak to him [Torres] a lot and he still feels very strongly about this club,” García told a press conference.

“His life has been defined by what he experienced here and he is another option just like any other that the media have mentioned. Any great player that can come here will be welcome.”