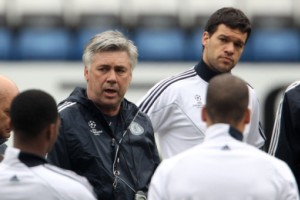 Interesting news are out and it has been reported that Chelsea have played down their decision to suspend new contract talks with four senior players.

It has been reported that Chelsea’s stance has increased speculation over the future of Michael Ballack and Joe Cole, 28, who is out of contract this summer and Nicolas Anelka, 31, and Deco, 32, who only have one year left on their deals.

It is understood Chelsea are keen to lower the squad’s average age by bringing younger players in and letting some of the older ones go.

But the club are adamant that postponing negotiations with the four players in question is not an indication that they are surplus to requirements at Stamford Bridge.


Ryan Giggs : We Will Fight To The End!