Reports are out claiming that John Stones has handed Everton a transfer request according to reports. 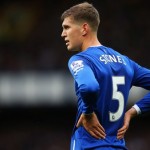 The Blues have already had three offers, ranging from £20million to £30million, rejected by the Toffees but the player is keen to make the move from Merseyside to West London.

Everton boss Roberto Martinez has continued to deny Stones a transfer to Stamford Bridge but it appears as though Jose Mourinho may finally be able to get his man with the England youngster eager to make the move to the capital. Obi Mikel Set To Miss The Remainder Of The Season