It has been reported that Chelsea are now finalising a deal for Augsburg fullback Abdul Rahman Baba. 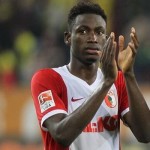 The Daily Mail claims that Chelsea have agreed a deal for left back Baba for an initial £14million.

Talks between Chelsea and Augsburg have been ongoing for weeks and the agreement will see a further £3.5m paid in bonuses depending on Chelsea performances, £700,000 after the 21-year-old completes 20 games and a further £3.5m after he has made 100 appearances — meaning the total value of the deal could reach almost £22m.

The Ghana international, who is also linked with Arsenal, has agreed a five-year contract and will head to London to complete his medical. Wilshere Will Be A Complete Player For Arsenal – Wojciech Szczesny