Reports are out claiming that Chelsea midfielder Marko Marin could be on the move to Augsburg. 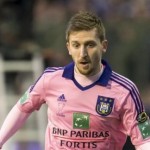 Marin remains tied to Chelsea and could become part of a deal for Augsburg fullback Abdul Rahman Baba.

Chelsea and Augsburg are still haggling over a fee for the Ghana international who is also a target for Arsenal.

However, negotiations could be smoothed by Chelsea including Marin in their bid.

Arsene Wenger Can Understand Why Man City Are Title Favourites