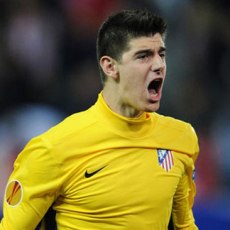 Interesting transfer news are out claiming that Chelsea are confident they have a deal for Atletico Madrid star Radamel Falcao.

The Mirror claims that Chelsea are confident they have won the £40m race for Colombian star Falcao.

The 26-year-old Atletico Madrid striker is regarded as one of the hottest properties in European football after his exploits with the Spanish club.

He scored 36 goals for Atletico last season and helped them win the Europa League.

And he made Chelsea aware of his threat with a hat-trick against them as Atletico won the UEFA Supercup earlier this season.

He has a buy-out clause of £40m in the contract he signed when he came to Madrid from Porto last year – and Chelsea are willing to meet that price.

Bayern Munich and Inter Milan have also been linked with Falcao, but Chelsea’s trump card would be the wages in excess of £150,000 a week that they can offer in a four-year deal.

A bargaining tool for Chelsea could be goalie Thibaut Courtois.

The 20-year-old was signed by Chelsea from Belgian club Genk for £5m last year and immediately loaned out to Atletico.

Atletico may ask for him as part of any deal involving Falcao – with Courtois valued at £10m.