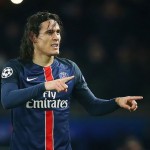 Reports are out claiming that Chelsea have formally approached PSG about opening talks over a deal for Edinson Cavani.

French sources say Chelsea have asked about the availability of Cavani.

Cavani is on the club’s shortlist ahead of a summer rebuild.

He is out of contract in 2018 and scored against the Blues in the Champions League last 16 first leg.

Chelsea’s current crop of strikers have all been linked with moves away from Stamford Bridge.

Arsenal and Manchester United are also said to be keen on the former Napoli striker.