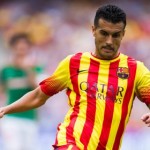 Reports have emerged claiming that Chelsea are monitoring Pedro’s situation at Chelsea.

Marca reported that Chelsea are weighing up a summer swoop for Barcelona forward Pedro, who wants to quit the Nou Camp this summer.

Arsenal, Liverpool and Inter Milan have all been strongly linked with the Spain international, but the trio could face competition from the Blues.

Blues boss Jose Mourinho values Pedro’s attitude on the pitch and his ability to press the opposition, while he is a valuable and reliable source of goals.