It has been reported that Anderlecht whizkid Youri Tielemans is on Chelsea’s radar. 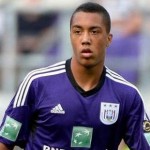 The Daily Mail reported that Chelsea are continuing to monitor Tielemans at Anderlecht.

They are not alone, however, as Manchester City, Tottenham, Manchester United and Arsenal have also watched his progress since he became Belgium’s youngest Champions League debutant at the age of 16 years, four months and 25 days last October.