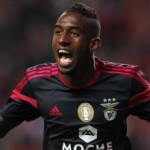 The London Evening Standard claims that Chelsea sent scouts to watch transfer target Anderson in action for Benfica during their 3-0 win over Belenenses at the weekend.

The Blues have been monitoring the striker since he was at Brazilian side Bahia and reportedly wanted to sign him in the summer and loan the 20-year-old to Vitesse Arnhem.

Work permit issues prevented the move from coming to fruition and he joined Benfica instead for just £3.2m.

Chelsea will face competition for Talisca, whose contract doesn’t expire until 2019, with Manchester United and Arsenal also linked with him. Arsenal Defender Understands Being Blocked From Moving Out On-Loan