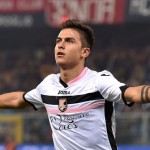 Reports are out claiming that Chelsea have joined the battle for Palermo striker Paulo Dybala.

Sky Italia claims that Arsenal and Chelsea are locked in a battle to sign Dybala.

Both clubs have made contact with Dybala’s agent to discuss a summer swoop.

Whatever his destination, it seems Dybala is set to join one of Europe’s biggest clubs at the end of the season following a sparkling 18 months.

Apparently, Arsenal did look in pole position, with talks scheduled for next week, but Chelsea have stormed in. Palermo are ready to sell the forward for £28.9 million.