Reports are out claiming that Chelsea boss Jose Mourinho has joined the battle for Real Madrid midfielder Sami Khedira. 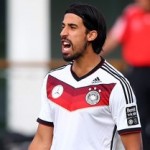 The Daily Mail revealed that Chelsea manager Jose Mourinho is keen on a reunion with Khedira.

The German international was a key member of Mourinho’s squad during his reign as Real Madrid boss and now he wants Khedira to move to Stamford Bridge.

Khedira has turned down an offer of a new contract at Real and would want £150,000 a week to come to London.

Arsenal are also in talks for the midfielder.