Reports are out claiming that Chelsea have been told to up their bid for VfB Stuttgart defender Antonio Rudiger. 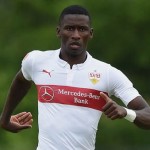 Stuttgarter Zeitung says Chelsea have already made their opening bid for the 22 year-old – to the tune of €10 million.

However, Stuttgart rate Rudiger at €18 million and have told Chelsea to try again for the player who is also wanted by Arsenal.

Both players have been linked with a move to Germany.