Reports are out claiming that Arsenal star Alexis Sanchez is being linked with a stunning move to Chelsea. 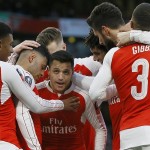 Sampaoli, who finished second to Pep Guardiola in a world manager of the year poll, quit Chile earlier this month and is on Chelsea’s managerial shortlist.

It’s claimed Chelsea have made contact with the 55-year-old Argentinian, who shocked South America by leading Chile to their first major trophy last summer.

And their chase will be boosted by the fact he’s learning English and would love the opportunity of moving to Stamford Bridge.