Reports are out claiming that Chelsea are attempting to secure Barcelona midfielder Cesc Fabregas without having to pay any type of fee to Arsenal. 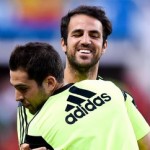 The Telegraph says although Arsenal have so far passed up the opportunity to re-sign Fabregas, they are due around 50 per cent of any profit Barcelona make on the Spaniard.

Chelsea have opened negotiations with Barcelona over signing Fabregas, but would prefer not to end up effectively paying their Premier League rivals Arsenal a percentage of the fee.

The issue is not a deal-breaker and there is hope that progress could be made on a deal this week.

Barcelona have put a £30 million asking price on Fabregas, but Chelsea ideally want to pay £27 million, which would see Arsenal miss out on receiving any kickbacks.