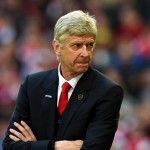 Chelsea look in a strong position to go on and win the title, having defeated United 1-0 at Stamford Bridge on Saturday evening.

The French tactician said he was unaware of the final result when quizzed on its significance at the post-match press conference.

“I ignore completely what happened. Chelsea won 1-0? The usual,” the Arsenal boss said. “We will see next week.” Arsenal To Compete With Tottenham For Toulouse Fullback Serge Aurier