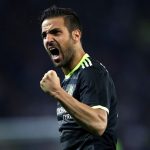 Reports are out claiming that despite his two goal heroics in the 4-2 success at Leicester, Cesc Fabregas will likely be back on the bench for his return to former club Arsenal in the League on Saturday.

The clash against Arsenal, were the Spanish midfielder spent eight years, is still a special one for Fabregas. He said: “I lived moments there that I have probably not lived elsewhere in my career.

“It was a very special place for me and that’s it. No matter what I hear, what they say to me, Arsenal will always be a fantastic special place in my heart.

They gave me everything. I will repeat it until I die. No matter what, they are always in my heart. It’s too early to know whether I will start or not.

Hopefully, I will. I’m not going to deny that I want to play every single minute; this is what I work for. But the coach chooses the 11 he feels is best suited to win the game.

“Whatever I am, I will support the team, inside or outside. When my time comes, I will try to perform, as I have been doing over the last few weeks.”