Reports are out claiming that Chelsea winger Mohamed Salah is demanding a significant increase in his wages to stay at Fiorentina next season reports The Guardian. 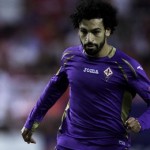 The Florence club have activated the £700,000 clause to sign Salah on loan again from Chelsea, but the player wants a yearly wage of just over £2million to stay at the club on a permanent basis.

The final decision rests with the player as Inter Milan wait in the wings and are willing to offer a £1.78m contract to the 23-year-old Egyptian

Former FC Basel ace Salah, who is also a target for West Ham United, scored nine goals in 26 appearances for Fiorentina in the second half of last season.