Reports are out claiming that Stoke City winger Victor Moses back into the fold for Nigeria after missing out the Super Eagles’ recent fixtures due to a thigh problem. 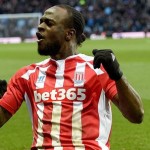 Moses has been in great form at the Britannia Stadium since the turn of the year and as a result, Nigeria caretaker manager Daniel Amokachi has decided to name the 24-year old on the standby list for the Super Eagles’ internationals against Bolivia and South Africa on March 26 and March 29 respectively.

Moses’ call-up should not worry Potters manager Mark Hughes too much though as Nigeria’s international games do not interfere with the winger’s club commitments, as Stoke play Crystal Palace on March 21 before their clash against parent club Chelsea on April 4 which is ineligible for.