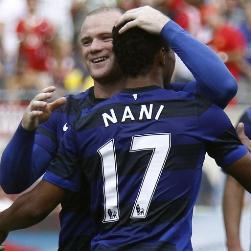 In a tough friendly outing for the English champions, Cory Gibbs gave the MLS side an early lead, which stood for nearly an hour.

But Wayne Rooney equalised with a neat lob, before further expert finishes from Rafael and Nani gave the scoreline some gloss for Sir Alex Ferguson’s side.

Much has been made of United’s need to replace Paul Scholes’s pinpoint passing, and the absence of a controlling figure in midfield was shown up in sweltering heat.

With Michael Carrick failing to assert himself, United contented themselves with playing kick-and-rush, attempting to exploit the pace of Danny Welbeck, Gabriel Obertan and Mame Biram Diouf.