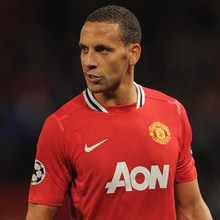 Sensational news are out and it has been revealed that Chicago Fire are chasing Manchester United defender Rio Ferdinand as their latest Designated Player signing.

The Daily Mail has reported that the MLS club are desperate for a high-profile English player to enable them to compete with David Beckham’s LA Galaxy, and have identified Ferdinand as their main target.

The England international centre back will be 33 next month and is out of contract at Manchester United at the end of next season.

Chicago want Ferdinand to join them next summer and believe they can persuade him to turn his back on the Barclays Premier League to finish his career in the States.

Lower US tax rates mean that Chicago would be able to ensure that Ferdinand’s take-home pay would be similar to the money he earns from his £120,000-a-week Old Trafford deal.