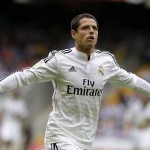 The Mexican international is currently on a season-long loan with Real Madrid, which are unlikely to take up the option to sign him permanently in June.

Marca reported that Chicago Fire and Los Angeles Galaxy came forward with offers to take Chicharito on-loan to MLS for the new 2015 season. United were prepared to see the move happen, but Hernandez rejected both proposals.

Despite Real’s current stand, Chicharito is determined to see out the season in Madrid and hasn’t given up hope of earning a permanent deal.

A return to United is now a non-starter, where United boss Louis van Gaal is satisfied with his current striker options.